Techiquette: how to score a free lobster

Has our addiction to technology led to bad manners? 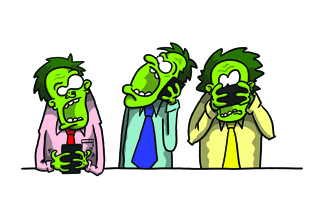 Let’s see a show of hands: how many of us have been subject to bad techiquette? You know – that rude behaviour you’re subjected to while sitting in a meeting, for instance? Like the guy who would rather attend to his WhatsApp conversation, the constant ‘tick-tick’ of the phone keyboard being pressed by another colleague, and the ‘swoosh’ and ‘ting’ of a sent or received message. All these draw your attention away from the issue at hand.

There’s tons of evidence in YouTube clips and 9Gag memes to support the point that perhaps our world is too consumed by that little device we call a smartphone. In fact, it sounds like the makings of bad jokes: a man ambles down the street…but he’s so preoccupied with his phone, he walks straight into a wild bear; a woman walks off a pier and falls into the sea because the content on her phone was much more important than watching where she was going. It’s not surprising then that authorities in the Chinese city of Chongqing took the initiative and opened a ‘phone lane’ for texting pedestrians. But what is the world coming to when we need to implement a 30m ‘cellphone lane’ for pedestrians? This is where we’re at in this, the digital age.